The first thing that is noticeable in Char-Broil is the large glass door. Though a lot of different brands of electric smoker that have glass door options but for Char-Broil it is a must.

It is to let the user monitor the cooking process easily. Char-Broil is one of the famous brands of an electric smoker.

There are various different types of smokers that come under this brand. These electric smokers are affordable and come with zero compromises on quality. 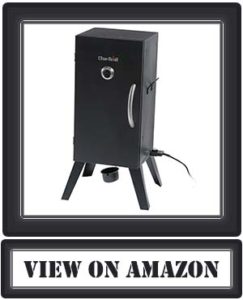 Vertical Electric Smoker is great for both the beginners and professional buyers.

The product has produced great results and has features that has made smoking easy for all.

The Char-Broil Vertical Electric Smoker is simple to use, modern design and compact. It has 504 square inches of cooking capacity.

This much space is enough to even smoke a turkey. Thus do not worry if you have thrown a party at your promotion. The vertical design makes is easy to load and unload meat.

One can with ease place meat on the racks.

You get a built in temperature gauge. It shall benefit the user in gaining information of the inner temperature. So in case you observe some heat loss or anything that might disrupt the cooking process you can take action on time. The food will not be over-cooked or under-cooked otherwise.

With the product comes a water basin and porcelain wood chip. The advantage of porcelain is its high heat resistance and so you can use it in high temperatures. 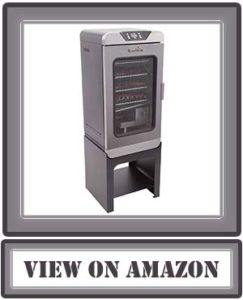 Char Broil is top rated American company when it comes to barbecue. They have been creating competition since 1948. In other words, they are America’s one of the first charcoal grills.

Char Broil have always left a corner of improvement and to mention they indeed have. Thus, expanding their range of products from grills to smokers.

One thing that gives them the edge is the point that their products are user-friendly.

Char-Broil has smokers, grills at very affordable rates with no compromise on quality. From beginner to expert, it is everyone’s choice.

Char-Broil Digital Electric Smoker Stand, 30″ like other digital smokers have a reasonable space to smoke meat.

It is to make the access easy for the one making barbecue.

The char broil digital electric smoker stand, 30’’ comes with a strong design which adds to the strength and durability. It is a very strong product and does not bend easily.

The reasonable cooking surface lets you smoke cheese, jerky, ribs, turkey, sausages. It is your product if you are fond of barbecues, camps etc. Char Broil smokers come with a glass door which lets the user have the needed check on the food being processed.

Using the glass door you can see the inner temperature and save your meal from getting over-cooked right before when you are to serve to your important guests. 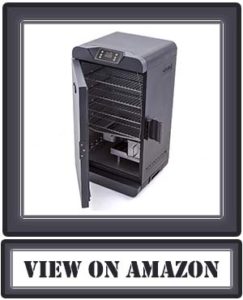 Char-broil has different range of smokers in line. Some come with blue tooth capability while some are insulated electric smoker. For our study guide we have Top Char Broil Standard Digital Electric Smoker 725 square inch.

This smoker has four racks among which the smoking space is divided. The racks are long and less deep so better not experiment it ribs or full briskets. The racks are more than a foot square.

This standard digital electric smoker of 725 inch is one of the simplest model to use by Char-Broil. The Char-Broil Standard Digital Electric Smoker 725 square inch has 800 watt heating element.

This heats a pan that is full of wood chips to produce smoke and control the temperature of the smoker. All this setup is in the insulated box that holds heat along with smoke.


The temperature influences the heating element. This is to keep the smoker at the needed temperature.

With Char Broil Standard Digital Electric Smoker 725 square inch you get to monitor the temperature of the food in the cooking process. There also comes a computer control system specifically programmed to hold certain/specific temperature till the meat achieves the target and goes into the warming mode.


If you do not disturb the digital setting of the electric smoker than you can also leave the smoker while the food is being processed. You can carry on some other work while the meat is being smoked.

The better part is that you can leave the smoker for straight 7 hours. This feature lets you socialize with your guests and enjoy with friends while the Char Broil Standard Digital Electric Smoker does its job. 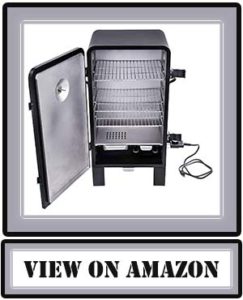 The Best Char-Broil Analog Electric Smoker is the latest version of the company’s vertical electric smoker. Majority of the features are that of the vertical smoker but there are some differences too.

The Char Broil Analog Electric Smoker is bigger in size and can adjust up to 544 square inches of cooking space. There are three adjustable cooking grids.

Such a heat and cooking capacity lets the campers to smoke their favorite fish, turkey, jerky, sausage etc. and host a party at a good scale.

Some of the smokers fail during raining season or when the wind is too strong. You get a built-in temperature gauge on the doors.

The help in indicating about the temperature in the smoker all the time and hence also makes the monitoring of the meal easy. There are wood trays that allows the user to add wood chips.


The smoker do not have wheels which makes it hard to move. But overall it is a great product to go for.